Global balance of power is subject to dramatic change.

After the collapse of Soviet Union, Francis Fukuyama announced “the End of History”. Western liberal democracies had won the Cold War. Democracies wouldn’t go to war with one another. The main clash, as Samuel P. Huntington had claimed, was supposed take place between civilizations; i.e. between democratic West and non-democratic (mostly Islamic) nations.

Globalization era had begun. Joseph Nye of Harvard had alleged that preferences of states could be shaped not only by hard military power but also by culture, democratic political values, persuasion, economic instruments and other soft foreign policy means.

Integration in European Union was deepening and expanding.

All the wold was supposed to be happy under unilateral American hegemony. Bipolar stability of Cold War period was replaced by uni-polar hegemonic stability under American leadership.

Why this dream did not work?

The fundamental reason is the division in Western World. If all Western countries were united around one single ideal and if they were sharing same interests; things would be different in international relations today. Conflicts in Middle East, Brexit, Crisis in Europe, War in Ukraine… and all other major international problems arise from this basic fact.

EU will be much stronger after Brexit. EU will become even stronger with Ukraine’s potential membership. Germany and France will never take Turkey as a full member in EU, unless Turkey reconsiders strategic partnership with America.

We cannot say that there are clear-cut lines like in Cold War days. When you look from this perspective, however, you can list hundreds of major and minor points of conflict between these powers.

China or Russia are not real opponents of American global hegemony. Unlike Germany and France, Russia and China lack the necessary social and political background for such a rivalry.

There will be, of course, problems between the West and the rest of the world. Yet this does not nullify the deep division inside the West.

I believe the new global balance of power will be shaped according to the groupings around America-Britain and Germany-France.

Leadership in the Middle East: culture, power or democracy?

Arabs should act for the “Unfinished Revolutions” 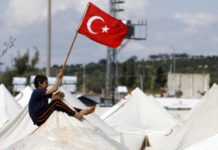 Leadership in the Middle East: culture, power or democracy?

Arabs should act for the “Unfinished Revolutions”

No Hurdles in Turkish – Russian Relations

Netherlands and Turkish Hatred in Europe